From hell’s heart I stab at thee 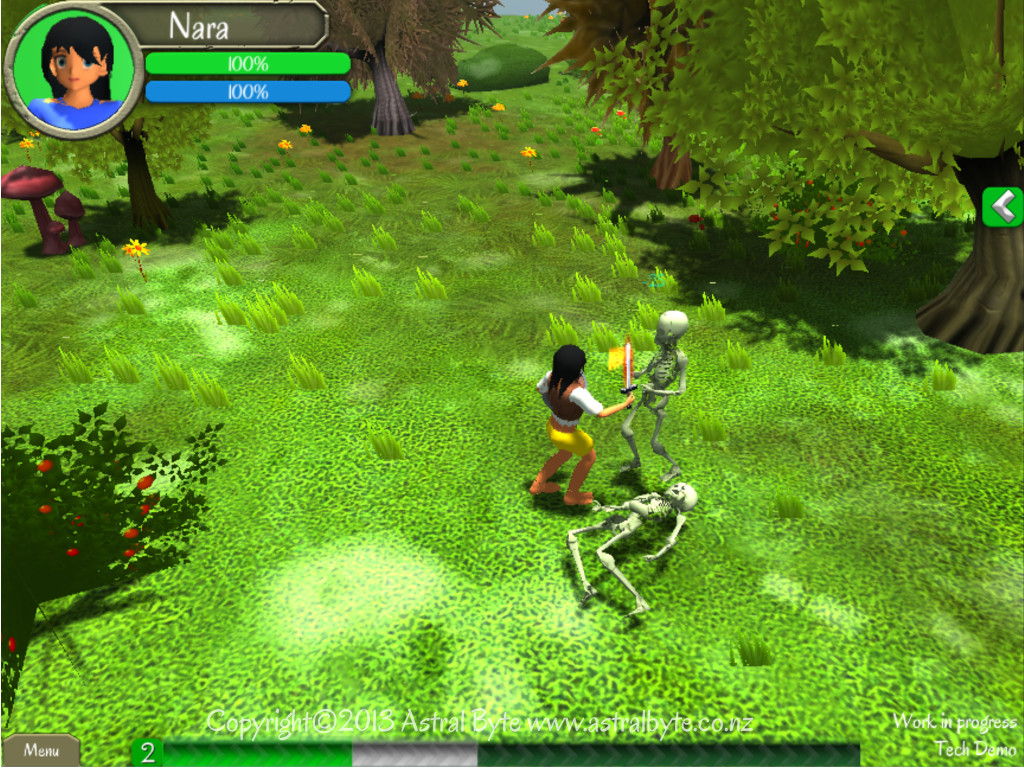 Exploring the map to find items is mildly entertaining at best. It is much more fun to hack your way through untold numbers of enemies.  I spent the last week working on the combat system. On a basic level combat system design seems rather simple. You have a weapon, weapon is used on enemy and they take damage. Things start to get more complex when you add armor, elemental damage, poison and resistances. And what if a weapon has base physical damage of 10, but also does bonus fire damage of 4? It was clear that even the most basic of combat systems requires a fair bit of work.

Cry havoc and let slip the dogs of war. 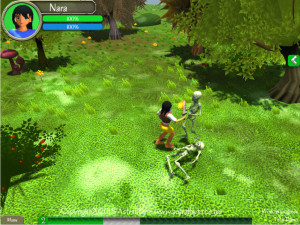 Having a combat system in place is a good start. However, at this point I still hadn’t added enemy AI so there was nothing to fight. Enter undead skeleton Fred. Our not so friendly Fred just doesn’t get a long with anyone. He randomly roams the area looking for a player to slaughter.

Fred has no resistance or armor so he takes all incoming damage. In the above screenshot you can see Nara has a fire sword that is doing some nice damage to him. The basic combat works like the following:

Since Fred has zero resistance, he takes 100% of hit damage. If the player attacks Fred with a physical hit of 10, then Fred takes 10 damage. If on the other hand, if Fred was given 4 armor, then he would only take 6 damage. 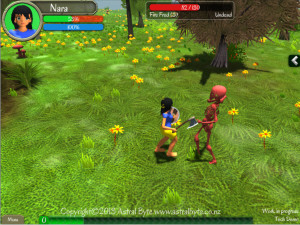 With the new combat system in place and enemies, I needed a way for players to see some information about their target. I added a basic health bar with the enemy name, (level), and class at the top of the screen.

You may also notice that Fred has a buddy named Fire Fred. As one would expect, he does fire damage and resists incoming fire damage. That shiny fire sword won’t help you here.

If you prick us, do we not bleed? 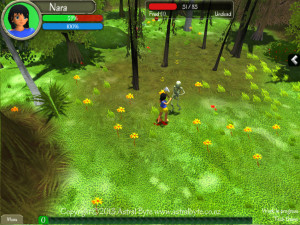 Taking damage hurts, and it makes us bleed

Alright, we can now kill untold numbers of monsters. Be warned though, it is just as easy for them to kill you. And when they hit, it hurts. In addition to the character screaming when hit, she also bleeds if they do enough damage in a hit. Look at the ground under Nara.   When her health gets below 30%, the health bar starts to flash letting you know it’s time to run.

Of course we can run, but Fred is fast and likes to chase us. Waiting for your health to slowly regenerate is not fun either. Time for a new item, health potions. 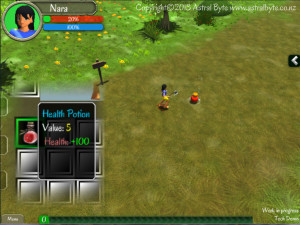 Lots of updates this last week.  We have enemies with basic AI, combat system with resistance and different types of damage, fire damage sword with glow and weapon trail, UI improvements and health potions.

This next week is looking to be just as busy with the addition of the skill/spell system.  I have come up with 32 skills.  Of them, 24 are active and 8 are passive.  You’ll have to check back soon to see them in action.

No comments yet Categories: Project Cobra
← Did you hear that?
When a half second lasts all day →