Heldric – The legend of the shoemaker

Do you enjoy hack-n-slash but longed for a bit more? Maybe you like tower defense games but find them a bit boring? Heldric is a unique mix of the same old styles of game with a few new twists. A hack-n-slash without endless level grinding. A tower defense game with more action. A game where you don’t play as an epic hero, but as a humble shoemaker who must work together with his fellow villagers to defend their home.

Build and upgrade the village quickly before the attack waves start. Each building you place adds unique abilities to not only the player’s character, but your fellow villagers as well. You must choose your structures wisely, as there are only a limited amount of plots to build. Each villager contributes to your coin income and provides essential help in defending the town.

You must help defend against waves of monsters intent on killing everyone. Do you have what it takes to survive?

Heldric, as most children often do, had dreamed of becoming a mighty knight. As he grew older and the king came to select new warriors, he was was not selected. Heldric felt a great sense of disappointment as his dreams were shattered. But as time went on, he learned to become a greatly valued and respected member of the community, as a shoemaker.

Years later the kingdom had been under attack from an unknown evil. After months of battles, a messenger arrived and told of a very dark source of evil. The king gathered all his forces in an attempt to vanquish them at the source.

In the king’s haste, he had left the kingdom unprotected. All of his men were away on the epic quest. When frantic reports of monsters have caused panic the villagers all screamed, “Who will defend us now?”

Heldric, while only a humble shoemaker, vowed to take a stand and help defend the village. Unfortunately, he wasn’t trained in warfare or even had basic weapon training. He would need the help of the villagers to accomplish this task. Only together could the hope to defeat the approaching evil. 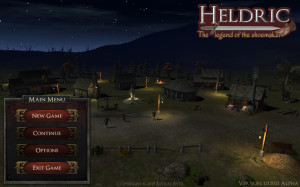 3 thoughts on “Heldric – The legend of the shoemaker”